It’s not a welcome sight to see the horror that resides in haunted places. Thorpe Park, from British Surrey, had such an experience when he decided to build an amusement  water  park that features water sleds slashing their way through constructed water passages. He envisioned people paying for the amusement that comes from the thrill of the adrenalin rush: he did not count on a different kind of adrenalin rush-one that accompanies fear.

He called his new park, Storm Surge, but there was something that Mr. Thorpe did not know about the site that he chose for his amusement park. Noone told him about the strange history so he began his construction (his optimistic forecast had the completion date sometime around 2011). Well, he was about to get his first clue that this site was not the typical place for amusement.

From the beginning, construction workers continually complained about things flying in the air and abnornal sudden drops in temperature at the site. These occurrences disturbed the workers so much that the management of the park eventually decided to call a group of paranormal specialists to investigate the paranormal activity.

The group studied the history and found out that the stretch of land that formed the site  was formally called „The path of the monks“.  Information about this path dates back to the year 666, an ominous number, don’t you think?. According to sources, the path was near both the local abbey and a church. There are legends that tell of  many tragedies that happened at these places. Some members of the paranormal team were known to possess psychic abilities: these  specialists said that the construction of this amusement park was seen as a threat to the nearby cemetery. This may have been the reason why bizzarre events took place: paranormal energies were disturbed at the very site, where nearby, the park was to be built.

“When our employers started to go crazy with these paranormal disturbances, we decided to call a paranormal expert and ask him to investigate whether everything is ok,“ said Mike Vallis from the entertaining park.

Jim Arnold, a team member of Southwest London Paranormal, reported ,“The investigation of our team led to special results. Weird phenomena, mysterious blury objects on photographs,…, and there was an extreme reaction of the ouija board above the spot where the atraction was to be built.“

An Amusement Park of sorts was created at Storm Surge, but one of a different kind envisioned by the proprietors. We will keep you informed when we hear of any future disturbances. 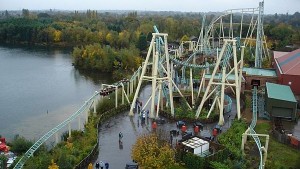