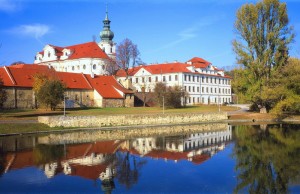 After touring the monastery complex, if you are not too tired and are interested in historic warfare, west of the Brevnov Monastery is a large park named “Hvezda”, in which on November 8, 1620 a bloody battle took place between the army of the Kingdom of Bohemia and the armies of Emperor Ferdinand II. There every last individual of 7,000 men were slaughtered. Later, the 27 leaders of the rebellion were imprisoned and subsequently executed on June 21, 1621 at the Old Town Square. “Battle at the White Mountain” has decided about the future of our country for three upcoming centuries.  This battle witnessed countless torture, suffering and death. Czech kingdom became part of Habsburg Empire and forced re-catholization process started.

A simple stone memorial erected in 1920 at the highest point of Prague (381 m.) reminds the battle which took place here in November the 8th 1620. Whoever walks at the White Mountain can feel disturbance and discomfort. There, around the walls of the battlefield can be heard the sobbing of Moravian soldiers who were trying to resist, fighting bravely to the last men, while the other comrades ran away long time before, knowing that battle was already lost.

According to a legend a young Swedish count Tor wanted to feel the glory and honor as a soldier so he had himself recruited. Prior to coming to Bohemia he traveled wide and far and when he was passing through Holland he met a beautiful woman Josefina. She begged him to stay with her in Holland but a young soldier had already decided before. Josefina, when she realized that weeping was pointless she joined him on his journey. There were heading towards Prague. Tor was killed in a battle.  A long time was Josefina looking for the body of her beloved Tor. A few steps from the Summer Palace his body was laying still. He was on his back, his eyes were closed. She sat on the ground, holded his head on her lap and waited for corpse collectors. Tor was buried by the wall of Summer Palace. Josefina was sitting there for several days. She did not eat, neither drink anything. Some time later she got up and walked away. Nobody has ever seen her again. A year later a rose grew out at the Tor’s grave. Following year it grew bigger. Soon it became a big shrub, flowering every year.The rose grows for centuries, not even freezing winters killed it. Whoever tries to destroy or cut the rose runs into misfortune: accident, disease and death.

The same Summer Palace where Tor’s body lay dead is itself a place of mystery and magic. Designed and constructed by Archduke Ferdinand Tyrolský in 1555-56, the entire structure is rich with symbols. The ground plan is in the form of a six-pointed star (hexagram), which symbolizes the connection between two opposite forces in mutual harmony. It is known that sensitive people feel a special energy in hexagrams. The middle of the Summer Palace contains such heightened energy that it swings a pendulum and turns the Divining rod. The hexagram is constructed of two equilateral triangles overlapping each other. The upper triangle symbolizes fire, and the lower symbolizes water. What is more interesting that these two elements can be found in the decoration of the interior of the Summer Palace. The underground is decorated with images of earth, on the ground floor there are images of water, the first floor is devoted to the air, and the top (second) floor depicts fire.

Recognizing its power, the National Literature Memorial obtained the structure and it is currently used as an exhibition hall. Expositions in the deepest level offer a model of the Battle at the White Mountain and engravings with the same theme. The floor above it hosts an informative exposition about the construction, development and history of Hvězda, including a video projection about the Summer Palace and a section dedicated to Alois Jirásek and Mikoláš Aleš.
The first floor invites visitors to see the “Time Memoranda” exhibition – including articles and writings from the fine collections of the National Literature Memorial.

In order to get to both places, take Tram #22 in direction to “Bílá hora“, which is conveniently accessible right from Prague City centre, metro stop Malostranska on “A” line.