Our Alchemy & Mysteries of Prague Castle tour is more of a historical walk than a ghost tour, but a few people on the walk have been asking if there are any ghosts at the castle as well as the Old Town of Prague. So for all those interested in the paranormal side of the world’s largest castle complex, here a few of the supernatural residents… 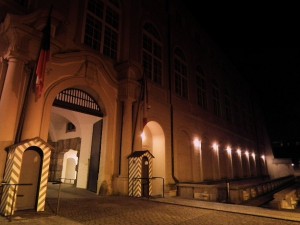 There is a ‘white figure’ said to haunt the cathedral, and he is mentioned in several legends. Firstly, a bell ringer who was in the habit of drinking too much and staggering into the cathedral drunk most nights, saw this figure looming over him in the St Wenceslas Chapel, and was warned to reform his ways and never enter the cathedral in that state again. The second report came from 1753, when a soldier patrolling the third courtyard around the cathedral saw lights burning in the windows, and when he went nearer to investigate, spotted a figure in white coming out of the Golden Gate (at that time, the main entrance to the cathedral). 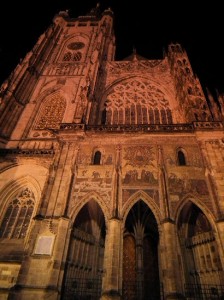 He challenged the figure to identify itself but in reply the figure only tossed a handful of wheat at the soldier’s feet. This happened again to two other soldiers over the next few nights, but the second was thrown a handful of coins and the third soldier, startled by the apparition, tried to shoot it, and was thrown his own bullet back. The figure then spoke for the first time, warning that this had all been an omen, and indeed the year after the harvest throughout Bohemia was good, the next year the economy was surprisingly healthy, but in the third year, the Seven Years War broke out.

The Ghost of the Deer Moat

You’ll pass the Jelení Příkop or Deer Moat on the Castle Tour, but this also is said to have a resident ghost. Attached to the moat is an area known as Lví Dvůr, or Lions’ Court, and it was here in the 17th Century that Rudolph II kept his pet lions. These were, according to legend, looked after by a fairly unscrupulous man who kept the high quality meat sent to him from the kitchens to be fed to the lions and instead sold it on at a high price, giving the lions any old rubbish he could find. 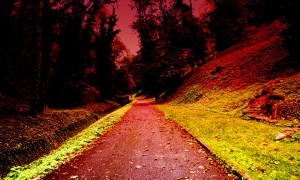 One evening, a travelling apothecary and potions seller was walking past the Lion’s Court, but had already walked a great distance across Bohemia, unsuccessfully peddling his cures, and was himself very ill. By the time he reached the gates of the court, his heart gave out and he collapsed, dead, outside. The lionkeeper saw him and decided not to waste the opportunity, and so dragged the body inside and gave the traveller to the lions for a meal, whilst he took to the good meat to market. Afterwards, when the traveller’s bones were picked clean by the starving lions, the keeper buried the remains in the Deer Moat itself.

A few nights later he went to check on his lions and saw the ghost of the traveller wandering the moat, and was supposedly so terrified and guilt-stricken that he hanged himself from the bars of the lions’ cage. Ever since then the ghost of the traveller is still seen now and then. But it was said he was more likely to turn up at the times that used to be feeding time for the lions.

The Mischievous Spirits of Golden Lane

Supposedly the Golden Lane has a group of imp-like spirits that play around the tiny little houses, but have been there even before those little buildings were constructed in the 16th Century. Some people believe they have always been there and are a sort of genius loci or guardian spirit left over from pagan times. 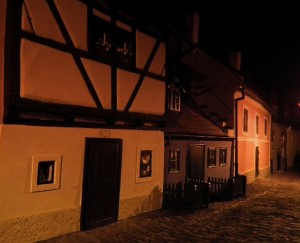 The most famous sighting of them was actually by the Emperor Charles IV, who ordered the building of St Vitus’ Cathedral. He wrote in his memoirs in the 14th Century that one night he had heard laughter whilst staying in that part of the castle, but when he lit a candle to see what was causing the disturbance, there was no one, however at the same moment an unseen hand lifted a golden cup from his table and hurled it across the room. Later Charles questioned the staff of the castle who told him of other sightings of these dwarf-like creatures in that area, and told him the legend.

If you come on the Castle Tour, you’ll leave the 22 tram at a street called Pohořelec and make your way towards Strahov Monastery, which the street borders (it runs from Petřín Hill down to Černínský Palác). Keep your eyes open for the ghosts said to haunt this area!

Firstly, there is a fiery hound, led by a headless master. The dog carries its master’s head in its mouth, and the legend goes that the dog is actually the man’s former wife, transformed into an animal in the spirit world for her sins. She had murdered her husband, beheading him, in order to acquire his wealth, but the husband had known her too well and had already hidden his money away. So from now on, the wife, in the form of the house, taunts him by chewing on his severed head in the attempt to get him to tell her his secret, where the money is hidden. 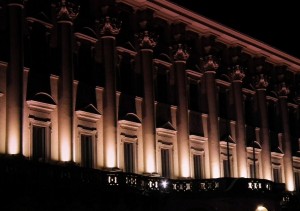 You’ll also hear a story about a specific area near Černínský Palác that is associated with the very early Přemyslid dynasty of Bohemia, Prince Bořivoj and his wife Queen Ludmilla, and their feud with their daughter-in-law Drahomira. Drahomira, opposed to the Christianisation of the country which Bořivoj and Ludmilla advocated, is generally portrayed nowadays as a demoness. Her spirit supposedly still lingers around the Pohořelec area, where there was once a small early Christian settlement and one of the first churches in Prague (roughly where the Černínský Palác is now). She rides a fiery carriage and rides around the castle’s churches and palaces, screeching and warning anyone who will listen that ‘bad days are coming’.

Remember, if you spot anything supernatural yourself on our Castle tour (or any of the others for that matter) then be sure to upload them to our Facebook page!