This month marks the beginning of our new, improved ‘Ghosts and Legends of the Old Town’ tour. We take our customers’ feedback very seriously and want to give the best tour we possibly can, so when people mentioned they would like to visit more locations on the Old Town tour, and possibly have less of a walk between the locations as well, we set our team onto devising a new route, and this rolled out on February 1st. The tour is now a little longer, with some new locations and a few more ghosts!

But, alas, we can’t quite fit in every story we’d like to, so we thought we’d have a look at some of the other legends some of our locations have to offer, and some things to look out for when you’re on your tour.

The House of the Three White Roses – During your tour you’ll pass briefly by a place called Malé Náměstí, the ‘Little Square’, just off the Old Town Square. On your right as you come from the Old Town Square and Astronomical Clock is the Rott Hotel, with the Hard Rock Café on the ground floor. This beautifully decorated building, built in the late 1800s on the site of a much older building, was once a clockmaker’s and musical instrument shop, and later an ironmonger’s owned by Vincenc Josef Rott, whose name still appears on the façade. The frescos on the building are by Mikuláš Aleš, a Czech painter of the 19th century who was also responsible for some of the decoration on the Municipal House and National Theatre. The house is also known as the House of the Three White Roses, and you can see the roses at the top of the gable. 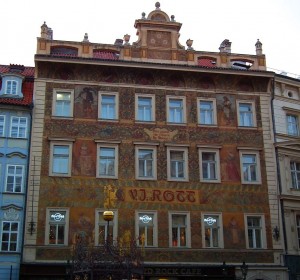 According to legend the roses represent three sisters who once lived in the house, who were extremely beautiful and who, at a young age, were orphaned and inherited a fortune. They were concerned with only one thing, however, and that was finding a good husband, preferably one who would whisk them off to some exotic land or foreign castle to live.  First one sister met the man of her dreams and was indeed invited to go and live abroad with him, taking her share of the fortune with her. Next the second sister was courted by a Duke, who also took her off to live in his dukedom, likewise with her property. Finally the last of the sisters, the youngest, married an English nobleman who promised her a castle on an island all to herself. She packed up her share of the sisters’ wealth and left with him.

Nothing was heard of the sisters for a long time, until news finally crept back to Prague. All three sisters had been wooed by the same man, who had taken them off, spent their fortune, then left them to die in poverty while he returned to the city to court the next sister.

The Carolinum – One of the new locations you’ll now visit on our tour are the Estates Theatre, where Mozart premiered Don Giovanni, and opposite it, the Carolinum, part of the Charles University of Prague’s campus. The oriel window there is the oldest surviving part of the university, in fact. There’s a particularly creepy story connected to this place, which your guide will tell you on the tour, but there’s also a slightly more romantic legend regarding a previous owner of the building.

Before the university was founded, a building on this site belonged to a townsman named Rotlev, who owed much of his wealth to a gold mine he owned. Very soon though the seam began to run dry, and Rotlev found himself in more and more financial trouble, until he was forced to mortgage his home and sell off all his furniture and all but the barest essentials from his possessions. Yet he was convinced the mine would eventually yield more gold and so used the money from these sales to pay the miners’ wages and let work continue. In the end, distraught, he called out “If only I could pay for one more day of mining.” At this, his wife presented him with a beautifully embroidered veil, decorated with gold thread, the last thing of any value that she owned, and a wedding present from her husband. Rotlev refused to accept the veil, but his wife insisted, saying he had given it to her once for love and now for love she returned it to him.

Rotlev pawned the veil and the miners were able to continue for a few more days. And on the last day, just before the money from the veil ran out, they struck a deeper seam, richer than any that had been found before. Rotlev was able to reclaim the veil from the pawnbroker and indeed found himself wealthier than he had ever been. The mine earned the nickname ‘The Wedding Veil’, and Rotlev built himself a new house on the site, far grander than the last, and it was this, according to legend, which was eventually acquired to form part of the campus for the university, and whose oriel window still stands today.

St James’s Church – One of the most active sites on the Ghosts and Legends of the Old Town tour is reportedly St James’s Church on Jakubská / Malá Štupartská streets. Be sure to have your cameras for this locations, as many people on the tours have reported capturing ‘orbs’ or other light anomalies around the church, or have experienced actual physical phenomena such as being prodded or, in the case of one of our guides walking alone past the church on her way to the office before a shift, being hit on the arm by something that felt like a snowball, a sharp blow and then as though the thing had dissipated, despite the street being, unusually, quite empty at that time.

The church is open to the public during the day and is an amazing example of Baroque architecture, and we highly recommend you take a look, but as you go inside, have a look up to your right. There’s a particularly macabre piece of decoration hanging from the ceiling – a mummified human arm.

Legend has it this once belonged to a thief, who sneaked into the church and hid, so that after the doors were locked and everyone had gone, he could ransack the place at his leisure. In particular he was taken with the jewels on a statue of the Virgin Mary on the altar, but when he tried to prize them off, the statue grabbed a hold of his wrist and try as he might, he was unable to get free. In the morning when he was discovered, attempts were made to get him free but without success, so that in the end, the executioner was called and the arm severed. As soon as the arm was cut off, the statue released its grip. According to legend, the thief, when he finished his prison sentence, retired to a monastery to atone for his sins. The arm has hung there ever since, as a warning to anyone who takes a shine to the church’s treasures!

The House of the Stone Bell (U Kamenného Zvonu) – Towards the end of the tour, your guide will bring you back to the Old Town Square, and at the entrance to a little street called Tynská, which spills out onto the east side of the square, is a medieval building with a stone bell carved on the corner.  Nestled in beside the Baroque Kinsky Palace and in front of the Gothic Church of Our Lady Before Týn, it’s a building people often overlook, but is in fact one of the oldest in the area. 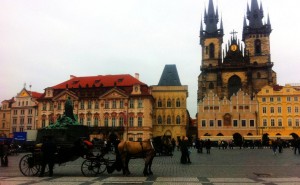 The earliest record of it dates to 1363 but most historians agree it is much, much older.  It was once part of a royal palace, said to have been built for King Jan of Luxembourg, who ruled Bohemia from 1310, and it was the birthplace of King Charles IV, the ruler responsible for commissioning such landmarks as the Charles Bridge, the Tynská church, Hunger Wall and St Vitus’ Cathedral. Charles also lived in this building for a time in the early 1300s.

So this little building, tucked away out of sight, was once the most important palace in Prague, just another example of how things are never what they seem in this city!

Check out our website for more information on the Ghosts and Legends of Old Town tour, as well as booking information and even some video footage of the tour.